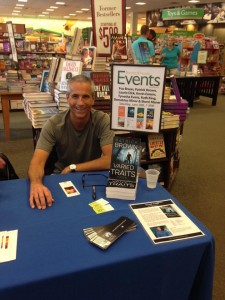 Patrick at a book signing for his first book, Varied Traits, at Barnes & Noble in Peachtree Corners, GA!

Inspired to write by authors like Agatha Christie, Stephen King, Michael Connelly, Jonathan Kellerman, and others, Brown began penning his first novel, Varied Traits, in the summer of 2014. The sequel, Heavy Hour, was launched in September 2015, and Spare Change, the third book in the Salem Reid Series, was published in the fall of the following year.

In 2017, Brown stepped away from the suspense/thriller genre to publish a work of literary fiction. The Gravel Road is a novel set in the early 1980s depicting a friendship between a teenager and a middle-aged man.

Growing up in Atlanta, Brown attended Chamblee High School and Georgia State University, majoring in Chemistry. An avid baseball and football fan, Patrick’s love of sports is sprinkled throughout much of his writing.

He currently lives in Northeast Atlanta with his wife and two teenage children, where he spends his time reading, writing, and practicing martial arts.