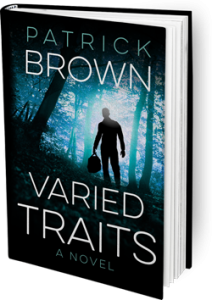 After breaking up with his girlfriend and losing his father, Salem Reid leaves college after his freshman year at Georgia Southern and joins the Army. He does two tours of duty in Iraq, and then stays in the troubled region to provide security to corporate figures and dignitaries involved in the rebuilding. He returns to his hometown of Atlanta after a decade, a decorated and seasoned war veteran. All is quiet for a while as he starts his security/limo service in Buckhead. But an old high school buddy seeks his help after a depraved night out on the town, and Reid is suddenly thrust into the world of drugs, sex, deceit, and murder.

Varied Traits takes us on a whirlwind tour of the streets of North Atlanta, as Salem Reid hunts down those who seek to harm his friends from both the past and the present. It is a tale that pits good against evil, right against wrong, and introduces characters who grapple with the blurred lines between sex and love.

Buy the Book
Kindle or Paperback
Leave a Review